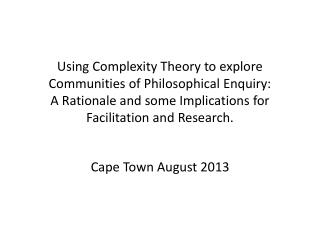 Using Complexity Theory to explore Communities of Philosophical Enquiry: A Rationale and some Implications for Facilitation and Research. Cape Town August 2013. Two Paradigms. Similarities Both consider that learning is promoted through enquiry.