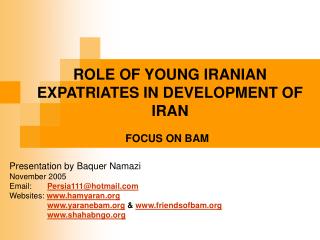 The History of Iran and the Iranian Revolution - Essential question: how is individuality a source of power?. the history

Role of the US in the Iran-Iraq War - . internationalization of the war. 1986:tanker war iran begins attacking tankers in

the role of brain development in the behavior of young offenders, ages 10-27 - . michael nerney and associates p.o. box

Role of html in web development - The marked up html document is said to be the structural layer of a web page. it is the

Role of Play in Child Development - . by: neelima. play. is an activity for amusement. play. intrinsically motivated

The Role of Media in Development - . topics to be discussed. construction of national, regional and diasporic identity

Role of Chambers In SME Development - . jose luis u. yulo jr. president chamber of commerce of the philippine islands co