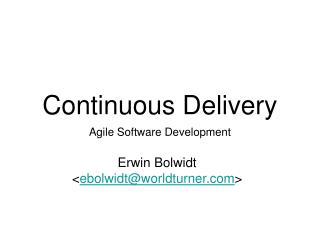 Continuous Delivery. Agile Software Development. Erwin Bolwidt < ebolwidt@worldturner.com >. My Background. Continuous Integration Scrum Deployment scripts Testing DevOps ... But: how to tie all this together?. What is it?.