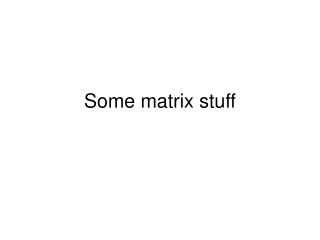 Some matrix stuff. What are Matrices?. A matrix is simply a way of organizing and manipulating information in a grid system consisting of rows and columns Kinds of Matrices Commonly Used with Multivariate Methods Scalar [1 x 1] Data [N x p] Vector [p x 1] or [1 x p] Some stuff - . various information for you!!!. significant figures there are two ways you can remember rules. ignore

Some Fun Stuff - . ce 453. diverging diamond interchange. “the $6 million project would cost about half as much as

Some administrative stuff - . reminder: mini-project is up on the web page it’s due april 19 get started early! project

Some K Stuff - . baxter mdaw 2012. extending the kritik —overviews . overviews: what they are for meta-level debate

Some extra stuff - . semantic change that results in an antonym of the original word: awful : original meaning:

Some administrative stuff - . class web page: http://www.cs.ucsd.edu/classes/sp08/cse291e/ web page will have a

First, Some Basic Stuff - . forces of nature our friend, the universe … up close and far away. all interactions in

But first…some fun stuff - . acl. that crazy festival. and a lot like online searching. searching for a. two key

The Membrane!!!! (and some transport stuff!) - . m . tweedie honors/college biology. made of phospholipids. hydrophilic

Let’s have some fun building stuff - . the next section i call the competition this is to give you more real life type

Some Best Android apps for selling stuff - We know about difficulty. you need a basement, few bucks, and garage or a