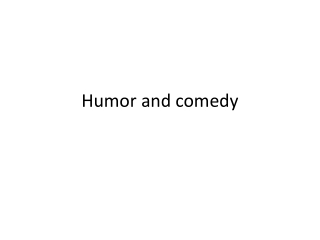 Humor and comedy. Humor. Humor can be seen as anything that makes us laugh or is amusing, or the ability to recognize what is funny about a situation or person. Comedy. Comedy has taken different definitions through the ages Humor and comedy - . comedy. comedy has taken different definitions through the ages aristotle defined comedy as one of

Tragedy and Comedy - . four assumptions. perfect definitions and an airtight system of classification are impossible it

HUMOR AND HEALTH - . by don l. f. nilsen and alleen pace nilsen. extraverts tend to be humorous, but. “past research

Improv and Comedy Theater - Improv Comedy World - Could i interest you in some thoughts? some of these nuggets are