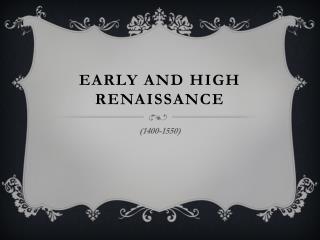 Early and High Renaissance. (1400-1550). Vocabulary. Renaissance - The term renaissance means rebirth and is used to mark an era of broad cultural achievement as a result of renewed interest in the classical art and ideas of Ancient Greece and Rome. High Renaissance - . sponsored by the popes and cardinals who vowed to transform rome michelangelo ’s ceiling of the

High Renaissance - . basilica of saint peter. known in italian as the basilica di san pietro in vaticano one of four

Nation States In the High Middle Ages and Early Renaissance - . some caveats…. these states will all develop at

HARLEM RENAISSANCE (Early 1920s-Early 1930s) - . the great migration and the end of wwi contributed to the beginning of