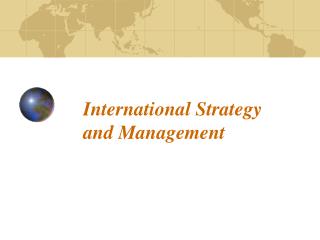 International marketing strategy - . at the end of this session you will…. be aware of some of the basics of marketing

The Strategy of International Business - . 8. introduction the focus is on the firm itself and, in particular, on the

BN 926 Strategy and Management of Change - . what is strategy and what are the future challenges to its successful