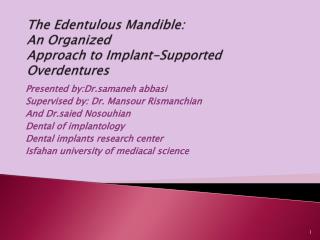 The Edentulous Mandible: An Organized Approach to Implant-Supported Overdentures The Edentulous Mandible: An Organized Approach to Implant-Supported Overdentures

The Keys to Writing an Effectively Organized Paper - . lyla nabulsi. what does expository mean?. expository writing is

An Organized Student - . tips and strategies to help you become and stay organized. does this sound like

AN INTENSE APPROACH TO - . where have you experienced intense worship ? describe what it looked like? what made it

An Approach to Anemia - . definition:. anemia is operationally defined as a reduction in one or more of the major rbc

An Approach to Partnering: - . confronting the challenge of how to begin? . kyle massey, booz allen hamilton. the

An Approach to Stoichiometry - . it begins with an analogy… it uses a grid… and it builds…. the acme trike co. the