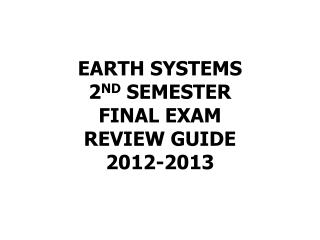 EARTH SYSTEMS 2 ND SEMESTER FINAL EXAM REVIEW GUIDE 2012-2013. What events warn scientists that a volcanic eruption may occur? . 1.) changes in earthquake activity near or around the volcano such as an increase in the strength and frequency of the earthquakes Semester 2 Final Exam Review - . how to enter answers. have you ever texted on an old-school flip phone? that’s exactly

Semester 2 Final Exam Review - . 1. how does the gulf stream affect climate?. it cools the eastern coast of the united

2 nd Semester Exam - . study guide. # 1 and 2 name the layers of the earth. describe the composition of each of the

2 nd Semester Exam - . study guide. binary- what is it? . a binary number is a number expressed in base-2 numeral system,