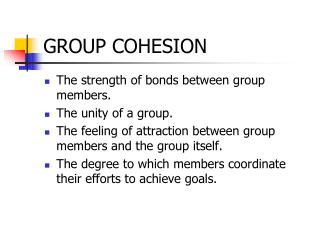 Group and Team Cohesion - . what is a group?. group: a collection of interacting individuals who share. a collective

Cohesion - . cohesion  describes the way in which a text is tied together by linguistic devices, such as  and so we see

Cohesion - . tying things together. cohesion. goal: to help the reader follow the logical progression of ideas to do

Cohesion - . cohesion. for readers to be able to understand writing, the information needs to be cohesive ; it needs to

Cohesion and Climate in the Small Group - . the importance of cohesion a definition of comm. climate six dimensions of

Cohesion - . staff development day may 2014. definition of cohesion. cohesion is about linking ideas or concepts and

Social Psychology of Sport 1. Group Cohesion - . 1.3 aspects of cohesion (or, as we will call, it – factors affecting

Cohesiveness (Cohesion) - . the strength of the relationships linking the members of a group to one another and to the

Community Cohesion: - . what is cohesion? interdependent principles – linking cohesion to equalities and diversity