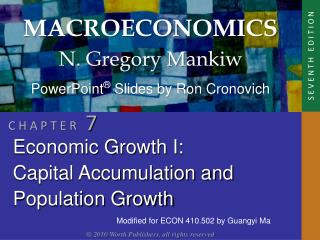 7 Economic Growth I: Capital Accumulation and Population Growth Modified for ECON 410.502 by Guangyi Ma In this chapter, you will learn: the closed economy Solow model how a country’s standard of living depends on its saving and population growth rates