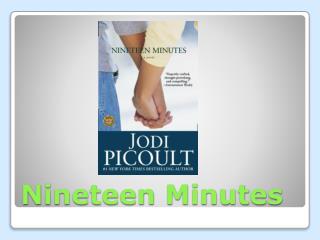 Nineteen Minutes. By: Jodi Picoult. Josie is the main character in this book. She is the character that everyone has a connection with. The book really revolves around her life, and this big event that has taken place. . Protagonist. nineteen - . color. many thanks to steve eaton of the mit media lab for inspiration and examples. seven traditional color

Chapter Nineteen - . guinea pigs. alat presentations study tips. if viewing this in powerpoint, use the icon to run the

CHAPTER NINETEEN - . accounting for merchandise inventory. inventory errors. errors in inventory will cause errors on:

Chapter Nineteen - . understanding money, banking, and credit. the functions of money. medium of exchange anything

Chapter Nineteen - . prices and output in an open economy. introduction apples vs. gdp: supply in micro- and