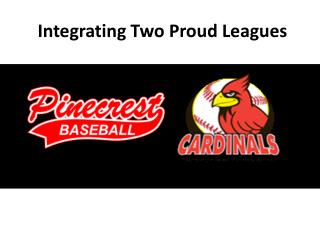 Integrating Two Proud Leagues. Scripting A New Chapter … . It starts with the name … . BUILDING A MODEL. What is built, must support the following 3 key pieces for a sustainable program. INPUTS: RECRUITMENT + RETENTION OPERATIONS: VOLUNTEER BASE OUTPUTS: BASEBALL PROGRAM. BUILDING A MODEL. Proud - The parents were so proud of there son because his a,b honor roll. proud. define: feeling pleasurable

PROUD - . are we in control?. sqa exams-a parents guide!. what do boys like?. they like…… to have control (remote)

The Negro Leagues - . john w. “bud” fowler. was the first negro player to break the “color barrier” in 1878

The Professional Leagues - . early years. pre-1940 hundreds of teams all over the country orginal celtics, harlem

Negro Leagues team - . a reading lesson. pair up and answer the following. what are the 2 most famous sports in the us?

Be Proud - . i try my best and don’t give up…it’s okay to make mistakes! i take pride in myself and in what i do. i