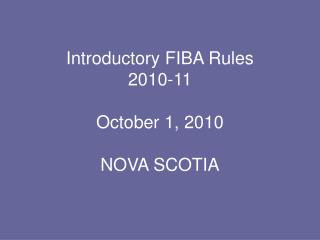 Introductory FIBA Rules 2010-11 October 1, 2010 NOVA SCOTIA. Jewelry. Absolutely no jewelry. Officials are asked to enforce this issue- it makes it difficult for others if you allow this. Playing Regulations. C.A.O. Application Procedures 2010 - . introduction. read the handbook carefully and have the prospectus of colleges