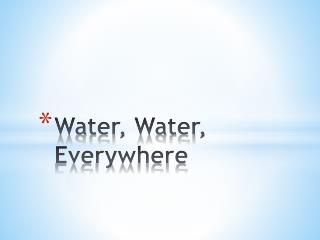 Water, Water, Everywhere. Lakes are large bodies of water that are surrounded by land and are not connected to an ocean. Lakes are relatively still bodies of water when compared to a river where the water flows. They can contain either salt or fresh water and are larger than ponds. Drainage - . introduction. water is component of all landscape designs that cannot be ignored. water issues include: too

Ice - You can go skating on ice, and that can be fun. but what is ice? ice is very, very cold water! water is made up of