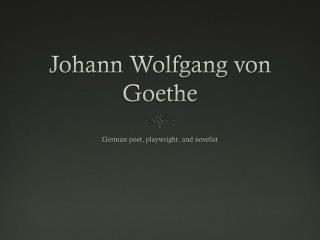 Johann Wolfgang von Goethe. German poet, playwright, and novelist. 1749 –Goethe was born on August 28 in Frankfurt am Main into a prosperous family 1765 - Goethe was only 16 years old when he went to Leipzig to study law at the university, following his father’s wishes. Johann Wolfgang von Goethe - . “when we engage ourselves emotionally and intellectually with the arts, we enter an