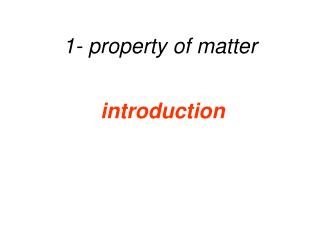 1- property of matter. introduction. States of Matter. Matter comes in a variety of states: solid, liquid, gas, and plasma. The molecules of solid are locked in a rigid structure and can only vibrate. (Add thermal energy and the vibrations increase.) . Property Dispute Matter Advocate - Mr. kislay pandey enlightens on this issue by saying that the act depicts who shall be

Unit 1 Matter - . “if we all did the things we are capable of doing, we would literally astound ourselves.” thomas a.

Unit 1: Matter - . concept: structure of matter. ueq: in dealing with matter, how are composition, structure, properties

Matter Class #1 - . ob: we will determine what matter is, what are the phases of matter, and describe physical properties