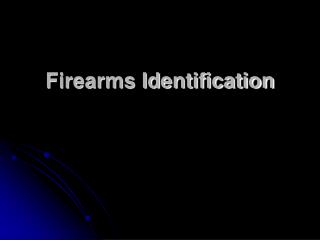 Firearms Identification. Forensic firearms examinations. identification of a bullet, cartridge case, or other ammunition component as having been fired by or in a particular firearm. Firearms Identification - . the class characteristics obtained from an evidence bullet can narrow down the possibilities

Firearms - . gun barrel markings. the inner surface of the barrel of a gun leaves its markings on a bullet passing

Firearms - By: stephen bush. firearms . cannons. cannons date back as early as the b.c years. cannons weighed around

FIREARMS - . firearms. introduction: many types of guns used for a variety of reasons. safety concerns always