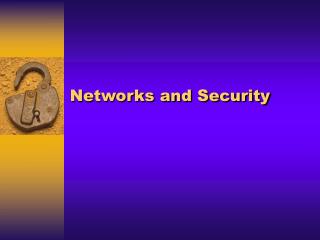 Networks and Security. How Real is the Threat?. 88% of IT staff polled in the US recently said their organizations had been affected by Internet viruses or worms in the past year even though 90% of firms have an IT security system in place. Information Security Magazine, 2001. Worm Threats. 254542 Networks Management and Security - . lecture 3. public-key cryptography. each party will have a public key for

254542 Networks Management and Security - . lecture 4. authentication protocols. a process of verifying that its

Home security networks - . submitted by: mark stead submitted to: mr. riche submitted on: sept,26 ,2102. what is a home

Home security networks - . how an house alarm works. the

Security and Cooperation in Wireless Networks - . thwarting malicious and selfish behavior in the age of ubiquitous