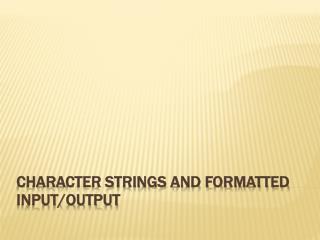 Character Strings and Formatted Input/Output. By now, you probably expect a sample program. Here is a program that engages in a dialog with the user. When you run this program, it produces result such as following Hi! What's your first name? Sharla Formats and Formatted Input - Formatted input. similar to column input in that fixed column locations are assumed for

Character Strings - . character strings. printf (&quot;programming in c is fun. &quot;); the argument that is

Character strings in c - . a string is an array of characters. strings must have a 0 or null character after the last

Formatted Output - 28. formatted output. objectives. in this chapter you will learn: to understand input and output

CHAPTER 8 CHARACTER AND STRINGS - . department of systems and networking. fundamental of strings and characters.

Character Input/Output in C - . cos 217. http://www.cs.princeton.edu/courses/archive/fall05/cos217/. precepts and office