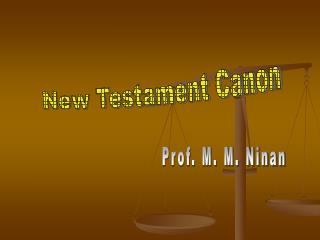 New Testament Canon. Prof. M. M. Ninan. Old Testament was the Scripture of the Early Church. 3 who saw Transfiguration. 12 disciples. and all these others who witnessed Jesus on the Road and the Risen Lord. People who saw and heard Jesus shared their experience. New Testament Canon - . three important questions. 1. why?. why was a canon needed? 1. christianity, like judaism was

The Canon of the New Testament - . and the da vinci code robert c. newman. dv code on the