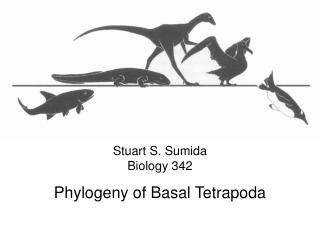 Stuart S. Sumida Biology 342 Phylogeny of Basal Tetrapoda. The group of bony fishes that gave rise to land-dwelling vertebrates and their descendants ( Tetrapoda , or colloquially, “ tetrapods ”) was the lobe-finned fishes, or Sarcopterygii . Biology 323 Human Anatomy for Biology Majors Lecture 18 Dr. Stuart S. Sumida - . from the head to the neck (or was it