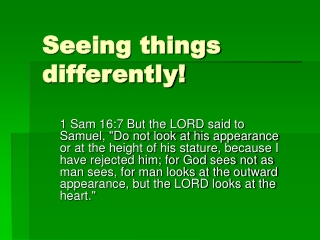 Seeing things differently!. 1 Sam 16:7 But the LORD said to Samuel, "Do not look at his appearance or at the height of his stature, because I have rejected him; for God sees not as man sees, for man looks at the outward appearance, but the LORD looks at the heart.". A better view.