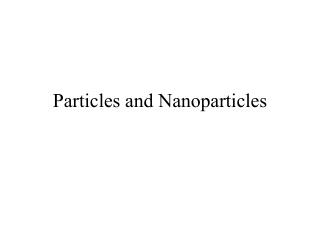 Nanoparticles - Generally refer to particles in the size range of 0.1 to 100 nm, where particles show completely novel

nanoparticles - Http://www.nanotrun.com/ we are expert in nano materials for many years and export the materials all

Particles and Forces - . bosons. chiral . for m=0 the helicity and the chirality are the same. the form of the spinor for

Waves and Particles - . topics light as a wave; light as a particle; particle-wave duality; the wave-like nature of

Particles and Processes - . http://cern.ch/geant4. physics. from the minutes of lcb (lhcc computing board) meeting on

Particles and Waves - . “the light and heat of the sun; these are composed of minute atoms which, when they are shoved

Matter and Particles - . 1. what are some of the gases you know about or have heard about. 2. how would you define gas?