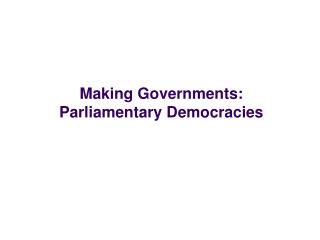 Making Governments: Parliamentary Democracies. Tuesday. Government. A parliamentary democracy is one in which the government depends only on a legislative majority to exist. The government comprises a prime minister and the cabinet. Governments OF BRAZIL AND MEXICO - . latin america. standards. ss6cg2 the student will explain the structures of the

The Electoral System and Parliamentary Reform - . sarah richardson (extra handout with facts and figures on timetable

How Much Do You Know About - . parliamentary procedure?. begin!. created by: sam

Making - . the. case. making the case for jesus not muhammad. all are “christian” (in muslim eyes), but do all

Multiculturalism in Liberal Democracies: The bounds of intervention in practices of minority cultures - Raphael cohen-

Introduction to decision- making and error Behavioral economics and consumer decision-making - . in this class, we will

A Comparison of Presidential &amp; Parliamentary Systems - . the role of institutions in a democracy basic question: