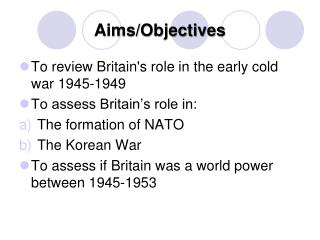 Aims/Objectives. To review Britain's role in the early cold war 1945-1949 To assess Britain’s role in: The formation of NATO The Korean War To assess if Britain was a world power between 1945-1953. Cold War Word search. Answer the clues Find the word in the wordsearch. Chapter 8- Curriculum Design - . design. the arrangement of the elements of a curriculum into a substantive entity.

The aims of this tutorial - . introduce the aims &amp; challenges of semantic web services (sws) to the autonomic

Menopause and HRT - . aims and objectives. aims to be able to diagnose menopause and know when it is appropriate to

Structural Genomics aims in identifying as many new folds as possible. - Macromolecular crystallography and structural

Business Aims and Objectives - . unit 1.3. bellwork. internet search, pick a company/organization that you have an