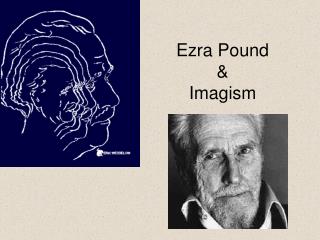 Ezra Pound & Imagism. Contributions to Modernist Poetry. More than any other writer, he was responsible for dramatic changes occurring with poetry. Urged writers to “make it new” Influenced other writers to discard traditional forms, techniques, and ideas Experimented with new approaches Imagism - . 1912-1917. what it is. poetry that presents an image as a larger statement. usually free verse there were

Cubism  Imagism - . a new way of seeing  a new school of writing. cubism. looking at a single object from multiple

Imagism - . what is imagism?. who: included english and american poets in the early twentieth century what: free verse

Imagism - . dr rose lucas. victorian poetry. alfred, lord tennyson, ‘the lady of shalott ’: on either side the river

Ezra - . for ezra had prepared his heart to 1.seek the law of the lord 2.to do it 3. and to teach in israel statutes and

Ezra Pound - . 1885 - 1972. biographical info. born in idaho but grew up in pennsylvania taught at a conservative