Study in the Acts of the Apostles - PowerPoint PPT Presentation 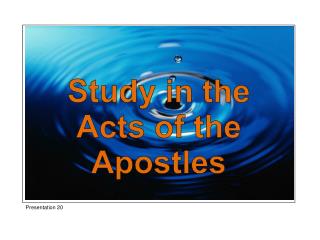 Study in the Acts of the Apostles Study in the Acts of the Apostles

The Church in Action - . lesson 6. lesson text—acts 1:14. acts 1:14 these all continued with one accord in prayer and

Apostles, Prophets, Ambassadors and Angels - De la salle’s meditations for the time of retreat and the apostolic

NARRATOLOGY - . critical theory. narratology: what is it?!. the study of narrative structures how narratives make meaning