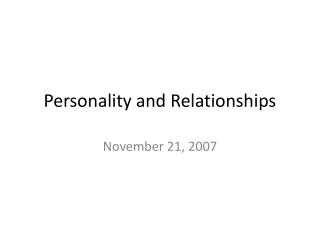 Personality and Relationships. November 21, 2007. Reminder. As announced last class, you have until December 5 th to complete the paper instead of November 28 th . Tonight’s Lecture. How does identity change with age? Is there such a thing as a midlife crisis? Relationships and - . the art of recovery gary broderick iasw annual conference 10 th may 2019. i am who i am because of

Personality and Lifestyles - . personality refers to a person’s unique psychological makeup and how it consistently

Genetics and Personality - . heritability and individual differences. what is inherited?. extraversion? neuroticism?

Personality and Individuality - . theories of personality. why do we create theories?. looking for patterns in the way

Genetics and Personality - . heritability and individual differences. what is inherited?. extraversion? neuroticism?

Culture and Personality - . what is cultural psychology? why should we study it? different research approaches structural

Identity and Personality - . the self identity personality. the self. self-understanding. self: all characteristics of a