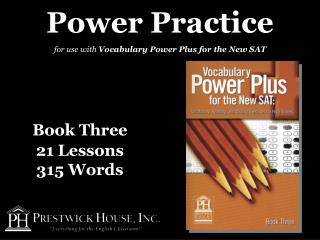 Power Practice for use with Vocabulary Power Plus for the New SAT - . book one 21 lessons 275 words. introduction to

ACT Power Plus Vocabulary - . lesson seven. adroit – (adj.) skillful; clever he was not an adroit speaker, but he

The Power of Vocabulary - . presented by andrea ruiz. before getting started…. “my mood” icon. please close out all

Vocabulary Power Point - . by cara pannell and andrew wright . the word augment connects to the picture because augment

VOCABULARY POWER POINT - . vocabulary no. 1. artist – a person who uses imagination and skill to communicate ideas in

Software for the new power supply system - . 2002 may 30 t.tsuboyama. the whole system was delivered from kenwood on 13

The Play for Power - . principle 1 : “all political behavior has a purpose.” (lowi, ginsberg, and shepsle,

The Use of Power - . i major arguments of kennedy’s book. (history &amp; speculation) ii elaborate on bismarck’s