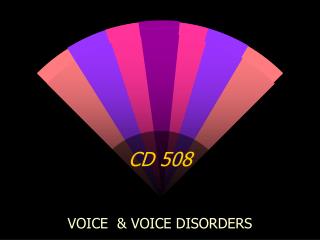 CD 508. VOICE & VOICE DISORDERS. Chapter 3. Voice Disorders. Functional vs. Organic. Functional - caused by faulty use of the vocal mechanism Misuse may lead to organic change Organic - related to some physical abnormality in structure at various sites on the vocal tract

508 - Understand the significance of section 508 and its makes use of. rehabilitation act 1973 changed into amended with

Section 508 - . survived year one, on to year two reviewing the process, lessons learned, and what to expect. what is

WCD/508 Program - . executive training. training overview. at the close of this training you will be able to answer the

Economics 508 Discussion - . this document will be updated from time to time. go down to next pages to see the latest

Section 508 Cookbook - . how to create a section 508 program from scratch. section 508 cookbook. recipes for creating a