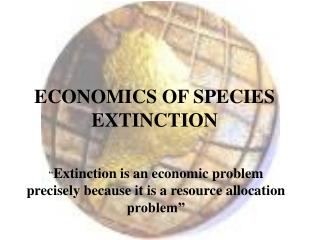 ECONOMICS OF SPECIES EXTINCTION. “ Extinction is an economic problem precisely because it is a resource allocation problem”. Clark Model (1973). Takes into account: Extinction of individual well-recognised species Biodiversity loss Based on 3 factors: Open access to resource

Extinction and Invasive species - . biodiversity at risk. the extinction of many species in a relatively short period of

Characteristics of Species Prone to Extinction - . amphibians. 38% of us amphibian species in decline reasons: 1. habitat

Species Extinction- Reasons and Effects? - In biology and ecology, extinction is the termination of an organism or of a

Enviromental degradation and extinction of some species ·SPAIN· - . endangered species in

The Economics of Hawaii’s Invasive Species - . kimberly m. burnett university of hawaii at manoa department of

Extinction of megasharks - . by: harley lewis. main question?. what happened to megasharks like carcharodon

Extinction of Behaviors - . defined: the process by which an association between two events is broken. if behavior is no

Factors of Extinction - . extinction. a species is extinct if no members of that species are still alive. most organisms

Factors of Extinction - . why are some species more or less prone to extinction?. source: