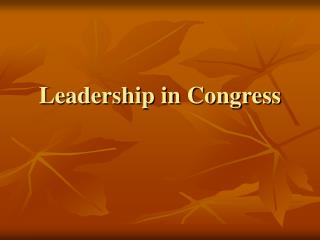 Leadership In Congress - . members of government and their assigned jobs. ueq and leq. ueq: how does the legislative

Congress in - Ch. 12. action!. congress in. congress gets organized!. the first day in the house all members are sworn in

Congress In Action - . making a bill a law. speaker of the house. elected by members of the majority party next in line

Congress In Action - . chapter 12. congress organizes section one. when congress starts a new term, the house

Voting in Congress - The yeas and the nays: roll call votes in the u.s. congress jeremy darrington, social science

Representation in Congress - . sex and race. congress- house- has become less white and less male in last 60 years (since

In Congress Assembled - . debating and deciding in an evolving context, 1775-1776. first continenal congress. met from