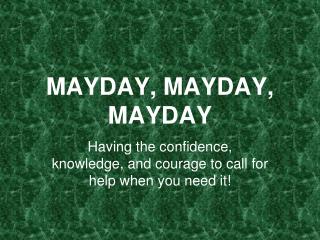 MAYDAY...! MAYDAY...! - A powerpoint presentation for all to

MAYDAY, MAYDAY , MAYDAY! - . by a/c ken whitmore adapted from the nfa dvd “calling the mayday” taught by the

Mayday - . …. the mayday celebration is about the springtime and celebrates its arrival for the growing of plants and

MAYDAY FOR MANDATE RELIEF - . warren county town hall may 16, 2012. mandates impact everyone. what is an unfunded

SECTION I MAYDAY PROCEDURES - . a partial guide to mcfrs safe structural firefighting policy. the purpose of this

“From Bad to Awful” Are you ready for a Mayday? - Kevin sehlmeyer chief of training grand rapids fire department.