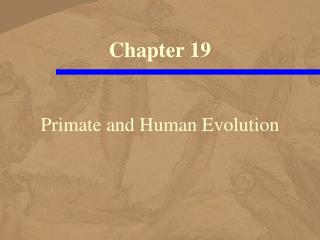 Primate and Human Evolution - Chapter 19 . primate and human evolution. the cradle of mankind. olduvai gorge on the

Primate evolution &amp; human origins - . light will be thrown on the origin of man and his history darwin,

Primate Evolution - . chapter 16. 16.2 hominoids to hominins. hominins. the lineage that most likely led to humans split

Primate Evolution - This chapter introduces students to the study of the fossil record using geological techniques. then

Physical Anthropology: primate evolution - . by the end you should know. taxonomy classification terms when and where the