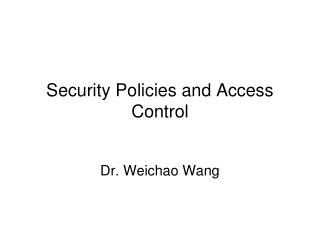 Security Policies and Access Control. Dr. Weichao Wang. Types of access control Identity based access control (discretionary AC, the owner controls it): the access right is based on the identity of the subjects and objects Access Control - . name space management. classes written so far all belong to a single name space: a unique name has to

Middleware Security - . in selected grid infrastructures (2010). david groep, nikhef with graphics by many others from

Medium Access Control in Wireless Networks - . biplab sikdar april 17, 2007. acknowledgements. many of the slides are

Adhere to Infection Control Policies and Procedures - . unclassified//rel to nato/isaf. fundamentals of

Chapter 3: Medium Access Control - . motivation. the main question in connection with mac in the wireless is whether it