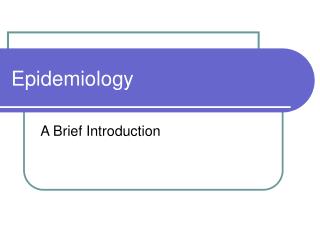 Introduction to Epidemiology and Study Designs - . adapted from original ppt by thomas songer , ph.d. – university of

EPIDEMIOLOGY AND NOSOCOMIAL INFECTIONS - . chapter 15. what is epidemiology?. table 33-1. epidemiology. what is

NUTRITIONAL EPIDEMIOLOGY - . the study of eating behavior and how it influences the etiology, occurrence, prevention, and