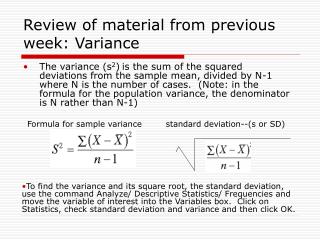 Review of material from previous week: Variance. The variance (s 2 ) is the sum of the squared deviations from the sample mean, divided by N-1 where N is the number of cases. (Note: in the formula for the population variance, the denominator is N rather than N-1). Formula for sample variance. Small Office Variance (SOV) Course Number 100#### - . the main goal of this course is to provide the learners with an

ANALYSIS OF VARIANCE - . introduction to one way and two way analysis of variance. neha jain lecturer school of