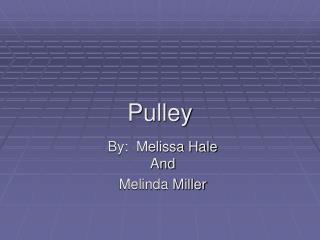 Pulley - By jonathan lemmon and brook dreher. pulley. definition of pulley. a wheel with a grooved rim for carrying a

Pulley - . …the higher the load is going to go. the more effort that is used to pull this rope down…. load. *a pulley

PULLEY LINE - . we will need to store excess casting (but this casting is not in order its for our future stock) . pulley

Stainless Steel Pulley Block - Pulley blocks at qmh inc. are made of high quality stainless steel that is corrosion

Stringing Pulley Manufacturer in China - We are also known as a leading stringing pulley manufacturer. we produce a vast

SECTION 6 OVER-RUNNING PULLEY - . over-running pulley. model the spring behavior of a one-way clutch in an over-running