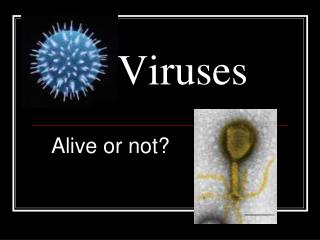 Viruses. Alive or not?. There are many viruses that affect humans. Here are a few of them. The AIDS Virus. Herpes simplex virus. Smallpox virus. Different types of Influenza viruses. Measles virus. Ebola Virus.

Bacteria and Viruses - . viruses. viruses are not alive!!! viruses are made up of genetic material surrounded by a

Viruses - . genetics of viruses. viruses are parasites of cells a typical virus: penetrates a cell commandeers its

Viruses - . what are viruses?. viruses are particles of nucleic acid, protein, and in some cases lipids. all viruses

Viruses Wkbk 20.1 - . watch for vocab, diagrams, and understanding structure and function of viruses. the discovery of

Bacteria and Viruses - . viruses. viral characteristics and structure from the latin meaning poison not living organisms;

VIRUSES - . give the worksheet a try!! answers can be found in chapter 19 section 2 on viruses (you need to look at the

Carcinogenesis and Tumor Viruses - . how do viruses contribute to the development of cancer?. animal viruses. lysogeny

-Viruses- - . are non-living particles. most viruses are “pathogens”. pathogens are disease-causing agents. viruses