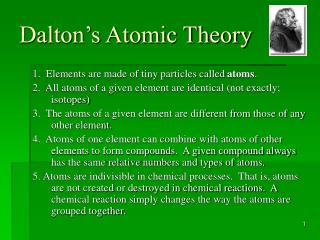 The Atomic Theory of Matter - . by shaffer lisle. the first theories. john dalton’s proposed theories: each element is

Dalton’s Atomic Theory (1808) - . elements are composed of extremely small particles called atoms . all atoms of a

Atomic Theory - . the movers and shakers of the subatomic world. dalton. in the early 1800’s, the english chemist john

Atomic Structure - . 4-1 studying atoms. what was dalton’s theory of the structure of matter? what contributions did

Atomic Theory: the beginning - . chapter 3 part i. democritus. an ancient greek theorized about the existence of atoms.

Dalton described the atomic nature of matter – is that the end of the story? - . john dalton. thought that atoms were