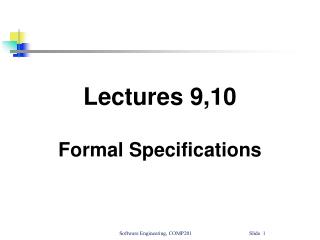 Lecture 9,10 Theory of AUTOMATA - . dfa state minimization. regular languages. any language that can be expressed by a re

Lectures - . what does some research tell us?. is lecture research still relevant? . average college student spends about

Exam 9,10 &amp; 13 Practice Test - . by april senger. which of the following normally warms up faster when heat is