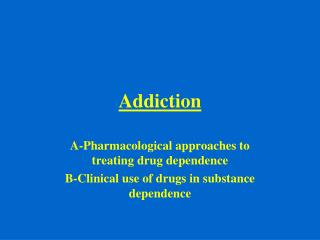 ADDICTION - . what is and what isn’t. leo lanoie, md, asam cert. addiction is not:. tolerance physiological dependence

Addiction - . addiction: being abnormally tolerant to and dependent on something that is psychologically or physically

Addiction - . substance abuse grade 10 phe is addiction a moral defect, a mental illness or a party gone wrong?. what do

Addiction - . alcohol , drugs and gambling. facts. addiction means that person has to get satisfaction from something

Addiction - Addictive behavior. out of control habits negative healthdifference between a habit and an

Addiction - . relying on a substance that is habit forming, causes cravings, and leads to the user becoming dependent.

Addiction - . nicotine . according to the specification you need to be able to :. describe, with reference to heroin and

Addiction - What does addiction refer to? or is it a disease? a behavioral pattern? or is it a larger experiential

Addiction - . “what is addiction, really? it is a sign, a signal, a symptom of distress. it is a language that tells us

Addiction… - . adapted from a class by john fitzgerald, phd, lpc, cas. what works?. relationships. what is addition?.

Addiction - . human brain. avg weight: about 3 lbs time to unconsciousness (when blood supply is cut off): 8 – 10

ADDICTION - What is it &amp; how do we use it to our benefit?. addiction. definitions: man’s view… god’s