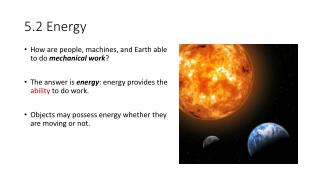 5.2 Energy. How are people, machines, and Earth able to do mechanical work ? The answer is energy : energy provides the ability to do work. Objects may possess energy whether they are moving or not. 5.2 Kinetic Energy.