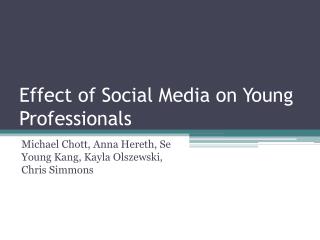 Effect of Social Media on Young Professionals. Michael Chott , Anna Hereth , Se Young Kang, Kayla Olszewski , Chris Simmons. Size. According to Facebook’s own statistics page, over 800 million people actively use the website 50% of active users log on to their profile any given day. Effect of Social Media on Public Relations - We are not just another communications agency; we are an agency that can

The effect of social media on breaking news: A media perspective - . october 2014. introductions and welcome. jonathan

The Consequences of Social Media: Possible Implications of Social Networking on Young Adults - Table 2 shows that 27 of

Barbie’s Effect on Young Girls - . lauren mortenson english 102, section 5232. why this is a big issue. barbie is a

The effect of advertising awareness on brand equity in social media? - In the modern world, people are more attracted