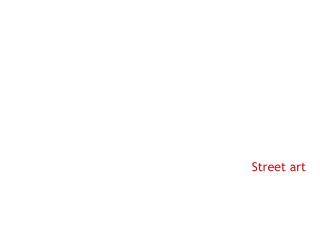 Street Art - . art of the street. graffiti. often referred to as nothing more than petty vandalism, graffiti and street

3D STREET ART - . we learnt about 3d street art in one of our art lessons and this power point will show you what we

Street Art Delhi - Street art in delhi ncr is a mix of contemporary, traditional, folk and high-quality wall murals that

Symbolism Via Street Art - . quickwrite : what is the function of art? what is it intended to provide people with?.