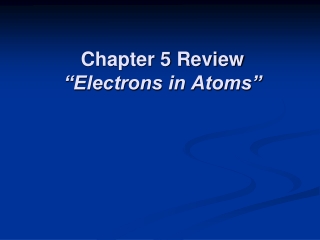 Chapter 5 Review “Electrons in Atoms”. Chapter 5 Review. What is the next atomic orbital in the series: 1s, 2s, 2p, 3s, 3p, ? In Bohr’s model of the atom, where are the electrons and protons located? What is the basis for exceptions to the aufbau diagram? Chapter 5 - . corporate governance. “earnings can be as pliable as putty when a charlatan heads the company reporting