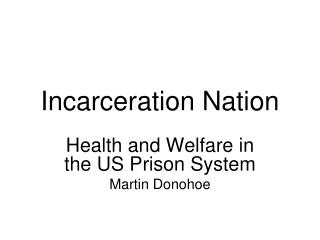 Parental Incarceration, Termination of Parental Rights, and Adoption - . a case study of the intersection between the

Bonds that Create a Nation-State - . nationalism: the belief that one’s greatest loyalty should not be to a king or an

MATERNAL INCARCERATION its effects on children and families - A presentation by christina n. semple center for child

The Social Costs of Incarceration - . discussant: robert lalonde the university of chicago june 6, 2006. outcomes of

Week 7: Mass Incarceration in the United States - . outline. an epicentral institution of the neoliberal age 1973-2008:

The Socioeconomic Status of Black Males: The Increasing Importance of Incarceration - . steven raphael goldman school of