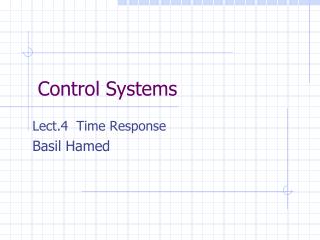 Control Systems. Lect.4 Time Response Basil Hamed. Roadmap (Time Responses). Chapter Learning Outcomes. After completing this chapter the student will be able to : • Use poles and zeros of transfer functions to determine the time response of a control system (Sections 4.1-4.2) Control Systems - . lect.6 stability basil hamed. chapter 6. after completing this chapter the student will be able to :

Control Systems - As ict. control systems. objectives. have an understanding of how organizations use ict. be able