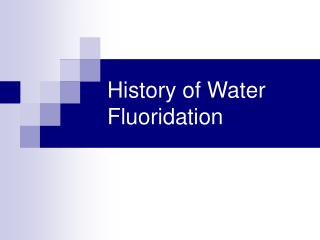 History of Water Fluoridation - . history of water fluoridation . two stories unfolded over more than half a century: the

WATER FLUORIDATION: MYTHS VS REALITY Or - . how to deal with the anti-fluoridationists in your city david f. nelson,